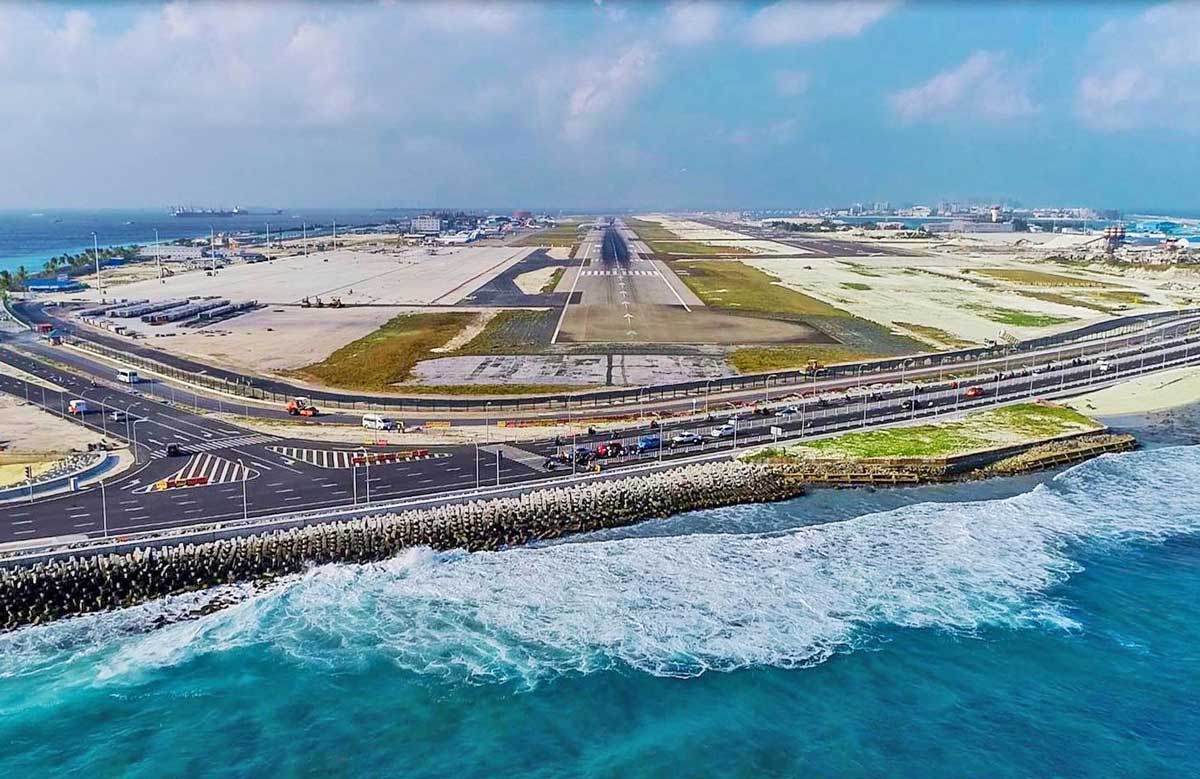 This is the main gateway to the Maldives. It was opened in 1960s as Male' International Airport. In 2008 it was rebranded as Ibrahim Nasir International Airport. On 1st January 2017 the airport was again rebranded to what we now call Velana International International Airport. It is situated in Hulhule’ island off capital Male’. This gateway is connected to Hulhumale’ by road, airport operates taxi and shuttle bus throughout the day and early hours of night. Capital Male’ is accessible by ferry boats that have frequent trips each way. Male’ Atoll, also known as Kaafu Atoll, is home to most of the resorts. Resort islands that are close to airport offers speedboat transfer day and night, further islands offer seaplane transfer that operates only at day time. A good place to stay overnight would be Hulhumale’ or city hotels in Male’. If you prefer the closes to airport, it is Hulhule’ Island Hotel which is few minutes by bus or van.


VIP Airport Service
The VIP Service is available at Velana International Airport only. The service allows passengers to skip the queue and proceed directly to the VIP lounge on a limousine that waits at the flight stairs. The airport host collects the passenger passport and do processing at immigration counter, also collect passenger baggage from belt. The serve is suitable for guests booking luxury resorts.

Built in 2020, Maafaru is the second most popular international airport in the Maldives. As the name suggests, it is located in Maafaru island in Noonu Atoll, about 180 km from capital Male'. The domestic airline Maldivian, operated by Island Aviation Services, offers daily flights from Male', it also offers easy connection to/from Hanimaadhoo. Most of the time it is a combined flight to Maafaru and Hanimaadhoo, sometimes there may be additional stopovers at Ifuru or Dharavandhoo depending seats occupied and flight size.

Right after opening of Maafaru International Airport the country went into coronavirus pandemic and international schedule flights were not started. Currently the international flights landing at Maafaru are mostly privet jets and occasional charters. Luxury resorts such as Cheval Blanc Randheli, Velaa Private Island or Soneva Jani are located near by, so it is very convenient for millionaires and billionaires to escape into their extravagant abodes whenever they wish. They can just fly to Maafaru, park their jet and take speedboat ride of few minutes before going barefoot on white sandy beaches where privacy and luxury comes with world's finest services by Maldivian butlers.

Government has recently upgraded the airport terminal to cater for international schedule flights, Soneva group donated a Covid19 testing facility right at the airport in order to allow passengers travel safely, via Maafaru International Airport. Schedule flights are expected to start soon, the country only opened it's borders on 15 July 2020. The government plans to divert some of the international schedule flights to Maafaru in order to reduce health risks. Noonu Atoll is well known for luxury tourism. But, there are also affordable 5 star resorts such as The Sun Siyam Irufushi or Robinson Club Noonu. If you want to book a 4 start resort this atoll is not far from Lhaviyani where Kuredu is located, it takes about 45 minutes by speedboat. Kuredu is one of the largest resorts, also there are other high class resorts in Lhaviyani Atoll if you prefer. Closet resorts include:
• Soneva Jani - 7 miles
• Sun Siyam Iru Fushi - 10 miles
• Velaa Private Island - 17 miles
• Noku Maldives - 7 miles

Addu is the southern end of the Maldives and the international airport is located in the island of Gan. It is 336 miles from Male' Internatoinal Airport. Closes local islands are Feydhoo and Maradhoo which connects many other islands by a course way called Link Road. Equator Village is a city hotel in Gan. There are 2 resorts in this atoll.
• Shangri-la Maldives Vilingili - 1 mile from airport
• Canareef at Herathera - 6 miles from airport

Located in Thaa Atoll, Thimarafushi is local island with a domestic airport. The island is 140 miles from Male' International Airport. Closes local islands are Gaadhiffushi, Kibidhoo, Omadhoo and Hirilandhoo. Other islands in the atoll are little far. There is only one resort in the atoll which is:
• Maalifushi by COMO - 12 miles from airport

Located in Laamu Atoll next to Thaa Atoll, Kadhdhoo is close to atoll capital Fonadhoo, Gan and Gaadhoo. There are many other local islands spread across the atoll. The Kadhdhoo airport is 160 miles from Male' International Airport. The only resort in the atoll is:
• Six Senses Laamu - 8 miles from airport

This airport island is located in Gaafu Dhaalu Atoll. The capital Thinadhoo, Madaveli and Hoadedhdhoo are closest local islands. The resorts in this atoll include:
• Outtigger Konotta - 11 miles from airport
• Ayada Maldives at Maguhdhuvaa - 30 miles from airport

This is the only single island atoll in the Maldives, it has its own domestic airport. Some guesthouses and small hotels exist in the island, there is no resort. Fuvahmulah airport is 308 miles from Male' International Airport.

The capital Male' is located in the central region of the Maldives. Male' Airport (officially known as Velana International Airport) is located on Hulhule' island which is connected to Male' via bridge, the airport shuttle or taxi takes only 10 minutes in between. Another part of Male' that is accessible to airport is Hulhumale', it takes only 5 minutes. Hulhumale' is modern city that has nice beaches and several small hotels of which some overlooks the beach. If you are looking for a hotel to spend just 1 night before travelling to resort Hulhumale' is the most popular transit hotel location. Similarly you may want to spend a night after coming back from resort and take international flight next day. In that case you could stay overnight at Hulhumale' for convenience. Other local islands close to airport includes Huraa, Thulhudhoo, Dhiffushi, Gulhi, Maafushi and Himmafushi. These islands are reachable in less than 30 minutes by speed boat. Closes resorts to Male' include Kurumba Maldives, Centara Ras Fushi, Sheraton Maldives Fullmoon, Taj Exotica, Grand Park Kodhipparu, Thulhaagiri, Paradise Island Resort, Banyantree Vabbinfaru, Baros Maldives, Gili Lankanfushi, Cinnnamon Dhonveli, Coco Bodu Hithi, Huvafen Fushi, Varu by Atmosphere, Vivanta by Taj, One&Only Reethi Rah.