Guest Uses Her Own Finger As Bait To Catch Fish

Many of the Maldives resorts do organised fish feeding once a day, usually in the afternoon or evening. While some resorts allow guests to feed stingrays during the feeding time others do the activity only by their trained pontoon. Other than this feeding session fish feeding is generally forbidden in resorts, to let fish use their natural hunting skills to survive in the wild. 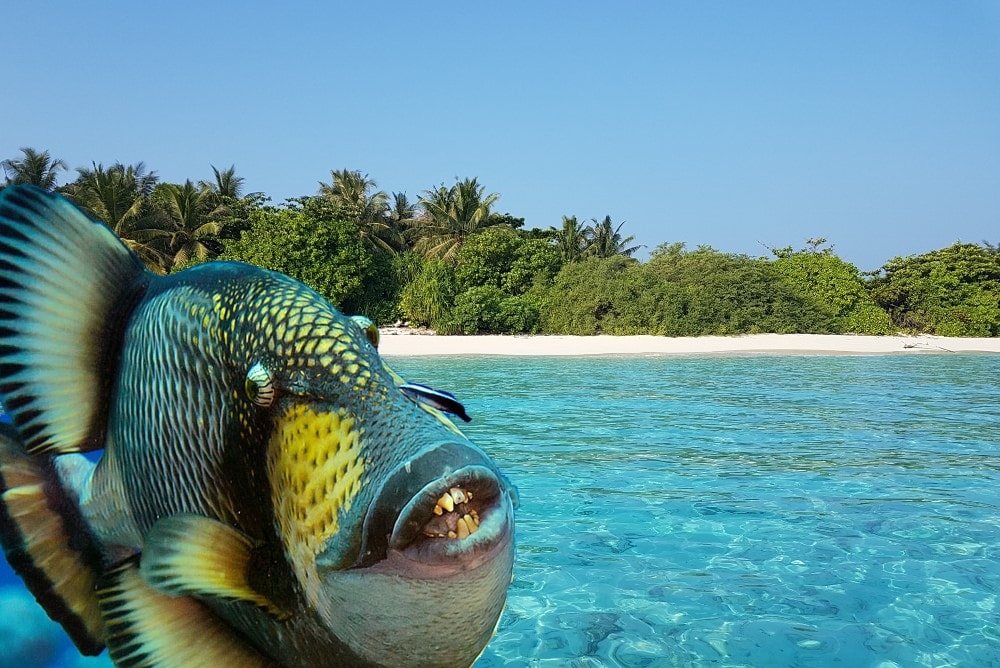 But, a Chinese guest decided to try it on her own and went to the arrival jetty with some food. Half way in the jetty there is a ladder to go down. At high tide the water is deeper than an average person. Non-swimmers wear life jacket and stay afloat holding the ladder while looking at the fish. This guest was enjoying fish feeding down there, but soon ran out of food. When that happened she pointed her own index finger towards fish. That’s when a medium-size trigger fish came and bit it. May be in panic, she threw the fish to the jetty.

Security officer at a distance saw a fish being landed. As he was walking towards the scene a guest came up the ladder and was looking down to fish. The guest showed him her figure, there were slight cuts and it was bleeding. Guest was not concerned of her finger, rather it looked like it was an exciting experience. She quickly attempted to go down again but the security officer was too curious to ask her why she was going down. To his surprise guest said she wanted to catch another fish. It looked like she just found an easy way to catch fish.

The security officer briefed her about resort’s fishing policy and asked her to release the fish back in water right away. She complied. He also suggested her to visit doctor’s clinic to get a dressing on the bleeding finger. Carelessly she said she would do later and enjoyed watching fish from the jetty.

The art of catching tuna
Guest converts bathtub to a fish tank. How he caught fish is unthinkable.
Can you imagine putting your finger in a giant eel's mouth?