Tourism was introduced to Maldives in 1972 when a group of Italians led by George Corbin and some local pioneers visited the Maldives, mainly for relaxation and spear fishing. First group of tourists arrived Maldives and stayed in Male’ for some days. At first their meals were served at Queen-of-the-night, a local restaurant which no longer exists. Maldivian food was too spicy for the Italians, it was then the local pioneers, Mr Afeef and MU Manik, decided to cook by themselves. It worked and after few days the Italians went to stay at the first tourist resort in Maldives, the Kuruma Village. The bungalows were very basic and lacked the most basic facilities such as fresh water, electricity etc. Natural beauty of the island and amazing spear fishing experience was greatly satisfying. First batch of tourists was a success.
During the introductory stage the Island of Kuramathi in North Ari Atoll was used a picnic island. This was one of the very first tourism bungalows built in the Maldives. It is said the bungalows in Kurumba were very much alike. Sadly we do not have any photo to show you. But, here is a picture from Kuramathi, back in 1972. 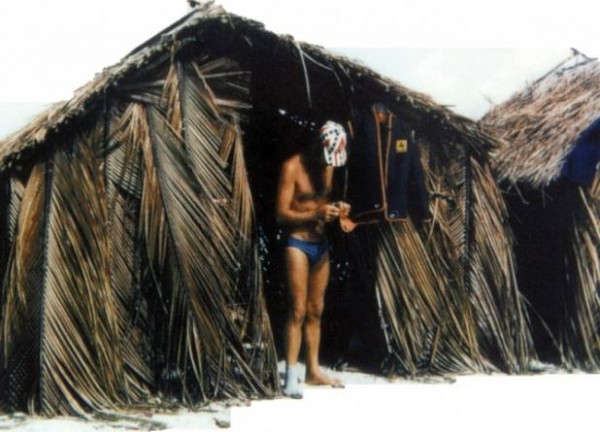 You can see the bungalow was very basic, even the palm leaves are not nicely done. It looks like a shaky hut which you can make in just a few hours. You would not need much labour or materials, it was just too simple. Nevertheless, the trip was so success that it led to the country’s biggest industry today.