How Did People Survive In Small Islands With No Food?

If you had ever visited Maldives you would have noticed the islands were small and there was potentially no food grown in the islands, except a few fruit trees in the backyard of few homes. That's fine in today's lifestyle. But, how did ancestors survive in such small islands for over 2500 years? 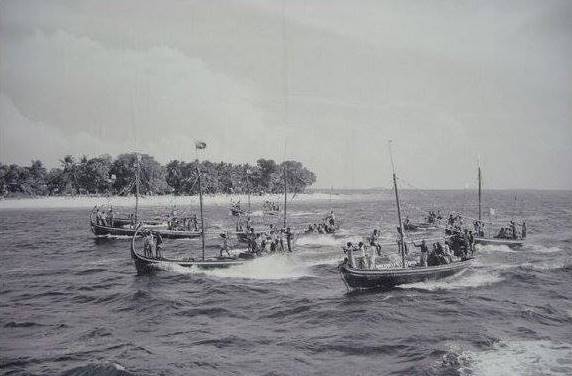 Maldivian people were, until recently, relying on sea for daily meals. Tuna was the most common of all. Every island, though small, got fishing boats and a large area of sea belonging to Maldives had abundance of fish which the ancestors managed to maintain though eco-friendly fishing. Pole and line, is the major form of fishing practiced in the Maldives even today. Maldives also used to export dried and smoked fish for which they bought rice, spices and other basic goods.

Coconut tree is the national tree of Maldives. Swaying palm trees could be seen plentiful in almost any residential island in the Maldives. Coconut trees were used in many ways. Young coconut was a healthy fruit with tasty juice and flesh inside a shell. You could also eat older ones, though not as tasty as young ones. The fibre in the husk was used to make coir ropes. Wood of coconut tree was popular for boat building and making of roof frames in houses. Palm leaves were woven as thatch and used as roofing and walls.

Young coconut was also used as an energizer for the sick, along with traditional herbal medicine.

Every island had a mosque where people went to pray. A well was made beside the mosque to supply water to perform absolution before entering the mosques. That well also served as main source of drinking water. People also used to collect and store rain water for drinking. For bath, every house got its own well and water level was just couple of feet beneath ground.

Fish makes miracle in the Maldives
Some people are scared of sharks but not humans
Maldives islands like oil rigs after 100 years? 7 ways to tackle rising sea level.